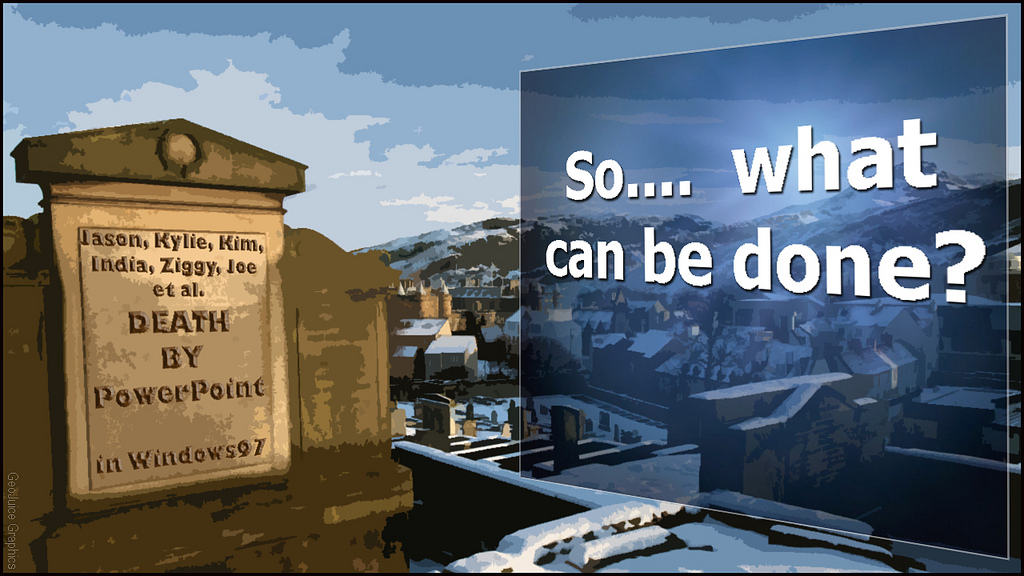 What do you do when someone you really like insists on behaving in a way you can see is dull, unproductive and generally a waste of time and energy?

I feel that about people who use PowerPoint. For the past 10 years I’ve been warning people of its flaws. I’ve been gently and tactfully suggesting to our clients that the psychological evidence is pretty damning.

The American military sees PowerPoint as an “internal threat”, because of the danger of it creating the illusion of understanding. Edward Tufte, the academic and visual-presentation expert, claims that PowerPoint “facilitates the making of lightweight presentations.” After all, how many life-changing TED talks relied on slides? (Ok apart from David Christian.)

Last week in a workshop a colleague and myself put PowerPoint to the test. First we asked them why they used PowerPoint, all the answers were about their needs (to remember what to say, to provide a structure and because the audience expected it.) No one mentioned the audience and their needs.

Then we carried out an experiment. We took two topics. The first we explained via PowerPoint and the second we asked them to discuss by standing around a flip chart. Two hours later we tested their knowledge. Nobody could remember a single thing about the PowerPoint but could recall most of what they’ve discussed.

So why is PowerPoint so ineffective? Simply put, PowerPoint can prevent facts from being placed in our long-term memory. The combination of text and visuals seems powerful but the presenter is also talking over it and the two things continually distract the brain. PowerPoint can place things into short-term memory but for that data to become part of our long-term memory we need both attention and some kind of “meaning.” Meaning is really context, connection to other things and how it will impact you.

I find a good presenter and a good story can keep my attention and provide all the meaning I need. PowerPoint does neither.

One of my favourite authors on presentation skills Jon Steel, a man who has won billions of pounds of advertising pitches, wrote: “Audiences expect PowerPoint because they have been beaten into submission by it, and because nobody has ever had the courage to question their judgment.”

At the end of the workshop we asked the group if they would now change and stop using PowerPoint and they said “no.”

I sighed and reluctantly gave them some tips for a better PowerPoint presentation: